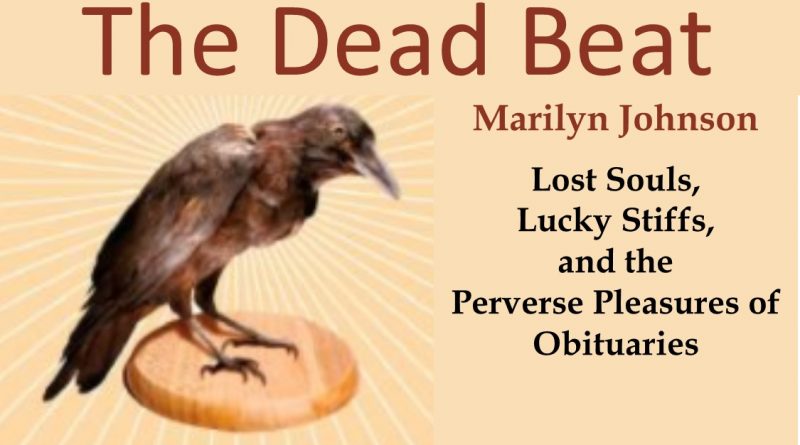 On April 7th the group will meet and discuss:

Once upon a time, journalism profs duly instructed their greenhorn grads to seek out community papers and the obit pages as logical entrance points into the world of newspaper reporting. Working for cash-strapped local papers allowed novices to practice writing everything from hard news to lifestyle features. Obituaries, meanwhile, were a rung on the ladder of major publications, albeit the lowest. The musty, dusty obit pages also traditionally hosted aging reporters put out to pasture. Not any more, argues Marilyn Johnson in her unabashedly knock-kneed love letter to the obit pages, The Dead Beat. Today, august publications like The New York Times, England’s Daily Telegraph, Independent, and The Economist, and Canada’s Globe and Mail use exalted members of the fourth estate to turn out smart, hip tributes to widespread, almost cultish, acclaim. Why? Because, as Johnson persuasively demonstrates in her book, truth is almost always stranger than fiction and a well-written, deeply researched obit is not only a vital historical record but a damn fine read over coffee and toast. “God is my assignment editor,” cracks Richard Pearson of the Washington Post and if that isn’t more interesting than what’s going on in your city council chambers, author Johnson and those working the so-called Dead Beat don’t know what is.

As Johnson explains in free-wheeling prose, today’s obit writers are virtual folk heroes with global Internet followings and their own conventions. With care and an ear for gentle humor, Johnson guides her readers through the surprisingly structured, labyrinthine obit scene, pausing to meet the writers while pondering both the essence of our being and why, in the right hands, the life of an average Joe can be just as riveting as the shenanigans of a high-flying playboy. And infinitely more resonant. Savvy J-school professors and their students are advised to take heed. –Kim Hughes